Hello and welcome to the second stop on the blog tour for Helen Giltrow’s recent release The Distance.

Today I am sharing my review of this fantastic crime thriller… 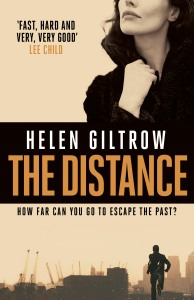 They don’t call her Karla anymore. She’s Charlotte Alton: she doesn’t trade in secrets, she doesn’t erase dark pasts, and she doesn’t break hit-men into prison.

Except that is exactly what she’s been asked to do.

The job is impossible: get the assassin into an experimental new prison so that he can take out a target who isn’t officially there.

It’s a suicide mission, and quite probably a set-up.

So why can’t she say no?

Starting with a narrative from Karla, aka Charlotte, aka Laura, that felt all very Noir , I was immediately drawn into this one. Karla works as a sort of privately contracted intelligence operative. Although she has been trying to leave that life behind and live as the glamorous but demure Charlotte……. (in fact her true identity ironically) she has been pulled into one last job – not least on the request of the man she cant quite admit to herself how much she loves (but don’t worry, it isn’t slushy or romantic in the least!)

Enter Johannsen, the actually very likeable contract killer with a traumatic past and an ever-present need to redeem and prove himself. He needs Karla’s help to get into ‘The Programme’, a social experimental prison posing as a town where all residents are convicts. Within this community is his next target, and the mission is practically impossible and extremely dangerous… so how on earth can he resist?

‘The Distance’ is absolutely drenched in mystery and intrigue, and I was completely hooked. In a sort of ‘Prison Break’ meets ‘Spooks’ sort of storyline, the action just keeps on coming and as one secret is uncovered, several more take its place. Karla initially comes across as too professional; intelligent, cool, calculated, but you soon warm to her when the author humanizes her by sharing her faults and fears. And Johannsen is very authentically portrayed as the cold killer with the warm heart. And with a range of fantastic supporting characters that are given just as much personality, nobody in this story can be accused of just making up numbers.

The build up to the climax had me whizzing through the pages, positively starving for the outcome; and at no point was I disappointed or left wanting at all. Giltrow very cleverly reveals the mastermind behind the whole conspiracy, and I cant believe I didn’t see it coming! It was all there, with 20/20 hindsight of course, but I was just far too busy relishing in all of the action to even give it any thought. I think this is what pleased me the most. I’m always so busy trying to analyse and foresee these things, that it can dampen my enjoyment of a book, and yet here I was far too busy enjoying the book to even consider analysis!

Overall, an extremely clever plot and a proper edge-of-your-seat read. 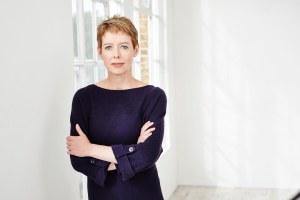 Helen Giltrow is a former bookseller and editor whose writing has been shortlisted for the Crime Writers’ Association Debut Dagger Award and the Daily Telegraph’s Novel in a Year competition. Her debut novel The Distance – a dark suspense thriller set in the world of criminal espionage, with a strong female lead – sold on the eve of the 2012 London Book Fair after a five-way UK auction; US and Canadian auctions followed. Translation rights have since been sold in nine territories including Germany, the Netherlands and Japan. She lives in Oxford.

Next stop on the tour: From First Page To Last

One response to “**BLOG TOUR** THE DISTANCE – Helen Giltrow”